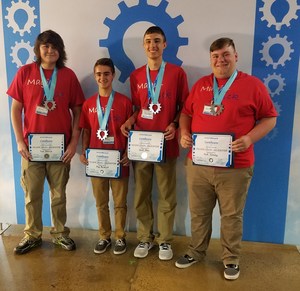 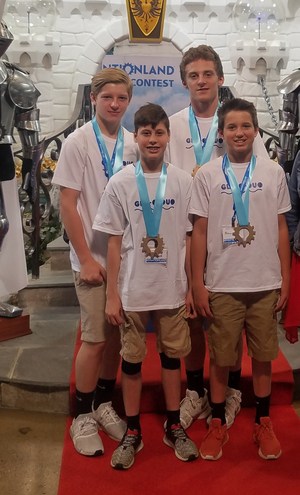 On May 4th and 11th, 2018, the high school and middle school Inventionland team competed against other schools for the prestigious prize of “Top Inventor.”

Throughout the school year, students in Mrs. Phillips’ rotation classes have been coming up with inventions or tweaking existing inventions as part of the “Inventionland curriculum.” After researching, marketing, packaging, sketching, etc., the students are then to pitch their inventions to a group of judges, much like “Shark Tank.” After each nine-weeks, there is a winning group that would be in the running to represent our school at the regional level.

Representing the high school on the regional level on May 4th was Jacob Hair, Joey Kurincak, Finn Dobosh, and Nick Swaney, with their invention, “The Magi-Pick.” The “Magi-Pick” is a guitar pick that can be wrapped around your finger, so you don’t drop it or lose it in the guitar while playing.  Their sales pitch was amazing and so was their product. After competing against the other schools, it was time for the awards ceremony. After much anticipation, the group’s name was called for the … Silver Medal! Congratulations, boys!

Representing the middle school on the regional level on May 11th was Jesse Jones, Beau Batis, Nick Sholtis, and Michael Stewart, with their invention, “The Glu-O-Duo.” The “Glu-O-Duo” is a double-sided glue stick where there is a liquid compartment, and then a stick of glue that can be pulled out from the bottom. This ingenious idea is sure to be a hit in the classrooms. Once again, after much anticipation, the group’s name was called for the … Gold Medal! The middle school team took home the prize of “Top Inventor.”

Congratulations to all of the teams, and to the middle school for a back-to-back win of “Top Inventor.”